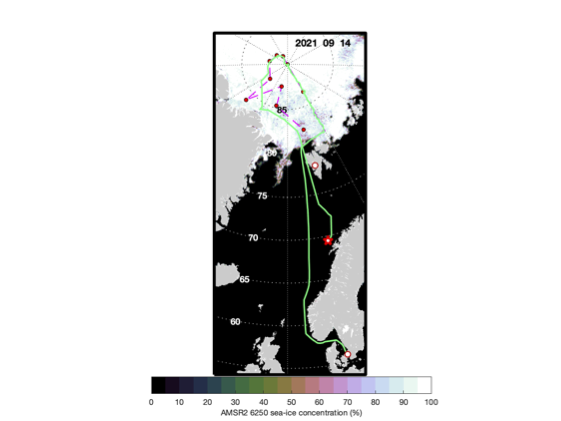 We left the last ice station on Saturday evening at 8 pm and reached the ice edge around midnight between Saturday 11th and Sunday 12th. The ice got thinner and changed to the forms of pancakes, and then suddenly disappeared within some hours.  Waking up on Sunday 12th - the first day of the transit - and looking out of the window: NO ICE only open ocean!!! It was really heartbreaking to realise there would not be any ice more, and the noises form the ship while moving on open ocean is not coming from breaking ice, but from the waves. The new sea-conditions required adaptation to a lot of us - as we were not used to the wavy motions and thus some of us got really seasick during the first days of the transit over the Atlantic.  However, we were not only seeing ocean and sea spray, but also the mountains of Svalbard were visible on Sunday. Me and John decided to launch the last weather balloon once we reach Svalbard - so it was time today :/ We invited our colleagues to witness
1 comment
Read more 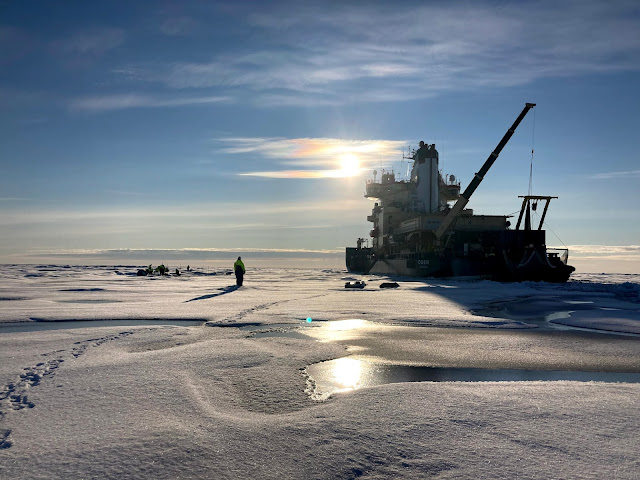 On Friday, 10/9, we arrived around 9am at our last ice station during the SAS polar expedition in the Arctic. We were steaming for quite a while before stopping, since we were trying to look for fish but could not find any. In the end, we ended up stopping at the new box coring station, which then became our Station I-location for these two coming days. The weather was lovely: the high pressure gave rise to blue skies and sunshine, but also cold northerly winds (up to 10 m/s in the late afternoon) and temperatures around -5 degrees. The helicopter was out in the morning deploying trap-and longlines. Ice coring teams and project specific groups were out on the ice in the afternoon, simultaneously as the beam net was operating in the back of the ship trying to catch some fish. We saw lot of birds flying around - first ones in over a month! Me and John went out after lunch for our last work on ice - it was so sad knowing it to be the last time, enjoying every second of the time! We were
Post a Comment
Read more 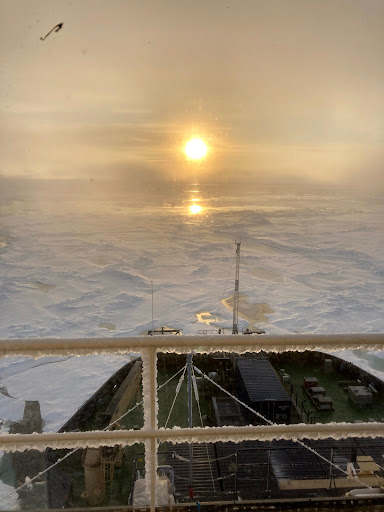 We left from Station H in the midnight 6/7 September and the whole Tuesday 7/9 was transit towards the next stop. There was a plan to stop for a CTD, but the captain decided we should just go on and save some extra time for the transit over the Atlantic, in case of bad weather. Tuesday was relaxed. After the morning balloon there was time for sports, computer work, movies and in the evening even dancing and watching Jumanji 2 with 15 people around midnight in the TV-room. Rest when you can!  Station at Gakkel Ridge Wednesday 8/9 Morning scenery I woke up this Wednesday (8/9) morning to a lovely scenery - the sun was shining but also some fog, making a magical landscape for balloon launch. We were still transiting to our station today and reached it around lunch time. As always, this station started with a helicopter flight for deployment of fishing traps as well as ice work and CTDs begun around 1 pm. This time the gangway was out, which made it possible for more than 4 people to be on
Post a Comment
Read more 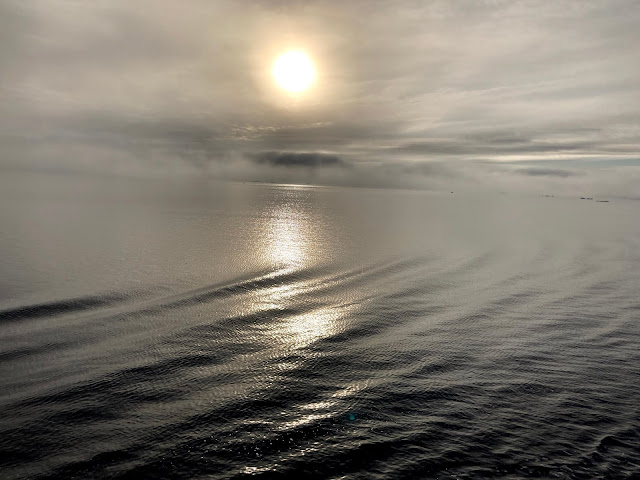 The ice stations were really close to each others, we just left one and the same evening we were supposed to reach our next station. This meant a lot of work for many of us - filtering and measuring water and ice core samples, preparing all the equipments ready for the next station, archive  data from instruments etc. We arrived at Station H on Sunday evening around 5 pm, starting with CTDs and again a helicopter trip for deploying fishing equipments at 8pm. I felt sorry for them - they had to get up early at 3 am in the morning for retrievals of the equipments and now same evening they had to go out for deployment at the next station! As this was not the first station, they were already experienced and effective, and fortunately returned to the ship already around 10pm in the evening. I was also planning to give a dance class together with Frank this evening at 8 pm, but the sudden change in the plans and the earlier arrival at Station H changed the relaxed evening to a stressful one,
Post a Comment
Read more 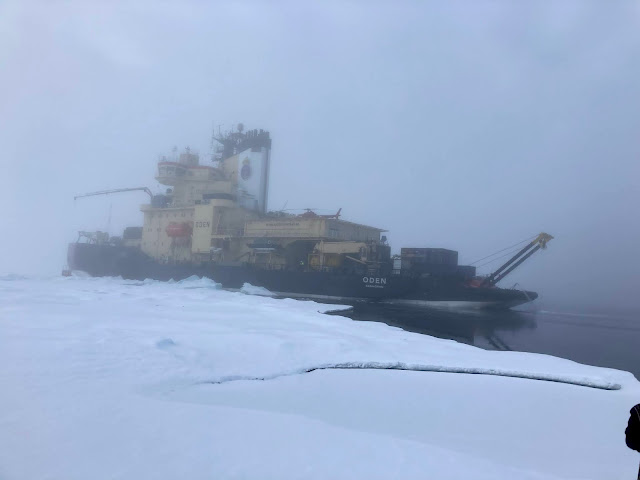 Friday 3 September - SAS ice coring station After a few days of transit, we finally reached our next short stop on Friday 3/9 - this station was dedicated to ice coring and a box core sample in the evening. During the early morning balloon the sun was still shining, but after a while the fog came suddenly and the ice station had to be shifted to later due to the bad visibility. We were searching for a location to park in the ice for a long time, during which the first SAS ice coring team went out with the helicopter. In the afternoon the sun came out again, sun rays magically reflected by the ice surface. Despite the return of the fog, me and John got allowance to go to the ice around 15, got lifted out with the basket and did a successful ice station this afternoon, during which the sun came out again, the temperature was pleasant -1degrees and the winds calmed down. It was magical. The second SAS ice coring team went out with the helicopter around 17, at the time when we got back on
Post a Comment
Read more
More posts